Dean Scarff made me kindly aware about his extremely interesting arXiv article Estimation of Climbing Route Difficulty usingWhole-History Rating. In this paper Dean estimates rock climber ratings and route difficulties using the “Whole-History Rating” based on data of the rock climbing site www.thecrag.com. The “Whole-History Rating” is a player rating which is an adaption of the Bradley - Terry model. I have to admit, I knew neither of them but I have worked with Elo ratings before (looking at soccer). In the past, I also wrote a paper looking at (changing) inequality of the allocation of player talentacross soccer clubs in German based on estimated player ratings (together with Roman Sittl). This is why I am delighted to see such approaches now being applied to rock climbing.

What is really nice is firstly that the topic is in my view extremely interesting, not only for research but for the sport itself. Secondly, the code seems to be fully available on GitHub. Thirdly, the estimated route difficulties are visually contrasted to the true (Australian) grades, as shown in the following figure further below from the paper. It looks quite reasonable (the large variance is perhaps a little bit irritating but that might just be a few very extreme observations for each grade). Fourthly, what is extremely interesting is the fact that www.thecrag.com dataset also seems to covers “No go’s” or unsuccessful climbing ascents (in contrast to the 8a.nu data). This is something I personally collect for my own ascents but I never have seen someone else collecting it. This really allows to estimate the player and route ratings soundly. Finally, the methodological description is short but seems solid (but I have not thought everything through as I would if I had to peer-review the article).

Some feedback for improvement the paper from my side would be the following: Firstly, the paper is extremely short (which is common in computer science as far as I know) but a little bit more information here and there would be helpful in my view (e.g. about the Australian Ewbank grade system in comparison to the French or US grade system or about the underlying dataset). Secondly and more importantly, I would love to see in the end some more climbing-related interpretation – perhaps even contrasting the route rating and the successful / unsuccessful player ratings attempting that route for a well-known Australian route. I say that because it would demonstrate that such an algorithm is not just interesting for research per se but might, for example, be used as supporting evidence in a grading dispute etc. Thirdly, a minor point, do one really needs climber's ability to vary on a weekly level since on average climbers performance seems to be rather constant after a few years?

But I only say that because I think the article is great and I would like to see more! Thanks Dean.

In general, if you have any interesting rock climbing related research for me, please make me aware of it! 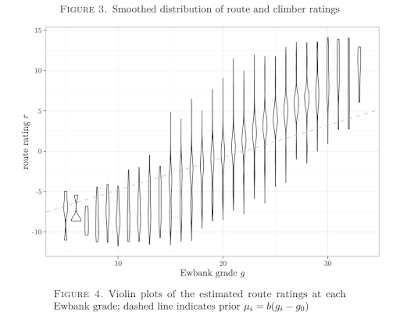