How much harder is onsighting vs redpointing?

Every rock climber knows that a successful onsight is much harder than an ascent with perfect beta after rounds of projecting. An onsight means climbing a route successfully at the first attempt without prior information or rehearsal on the route. During an onsight, we might not know where the crux lies or how long the route actually is. In contrast, being able to learn about a route, to mentally accommodate to the hard sections, the rest points and footholds, allows us to reach our maximum performance during a redpoint ascent.

Most of us also have a good sense of the routes we typically can climb in a first attempt with or without prior knowledge or in a second or subsequent attempt. But it is much harder to guess how much more difficult, let’s say an onsight ascent is, compared to a successful redpoint ascent. We might know that Adam Ondra did Silence (9c or 5.15d), currently the world’s hardest route, after weeks of practicing specifically for that route. Adam was also the first to flash a route of the grade 9a+ or 5.15a (a flash means a successful ascent of a route in the first go with prior information, for example from other climbers), and he did three 9a or 5.14d onsight. Alex Megos, however,was the first to onsight a 9a or 5.14d, he climbed up to 9b+ (redpoint). Up to today, no one onsighted a route harder than 9a. But is the difference between 9b+ redpoint and 9a onsight an meaningful estimate of how much harder an onsight is? A first attempt without beta might be easier among lower-graded routes compared to the elite level. Here, we want to investigate this question in a quantitative way.

As in previous posts, we will therefore access the data of the website 8a.nu which provides climbers with the opportunity to save their climbs and view personal scorecards. A scorecard is simply an overview about routes achieved, the respective style and the grade among others. In this post, we look at the maximum onsight and the maximum redpoint grade of 8a.nu users who made their scorecard public. We focus here on climbers who climbed redpoint at least 6a or 5.10a or higher. The available dataset covers entries up to September 2017. This leaves us with almost 18,000 climbers. 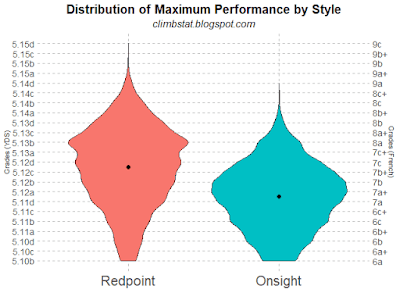 Next, we want to investigate whether the results differ across the performance spectrum. For this purpose, we group all climbers together by their maximum (redpoint) performance on their scorecard. Now we look at the average maximum onsight performance within each group.

How does this grouping work and how did we finally calculate the average onsight performance? Let us take those climbers who sent 9b+ or 5.15c as maximum (regardless of whether they are included in the 8a.nu data). These are Stefano Ghisolfi, Alexander Megos and Chris Sharma (Adam Ondra is not included in this list despite the fact that he did three 9b+ because of his 9c redpoint). Alexander Megos did an 9a onsight while Stefano Ghisolfi and Chris Sharma onsighted up to 8c at maximum, according to Wikipedia. The onsight average of this group is therefore slightly below 8c+.

The following graph shows how the redpoint-onsight performance gap across all grades. On the x-axis, we have plotted the maximum (redpoint) performance. The y-axis shows the maximum onsight performance. If climbers onsighted grades similar to their redpoint performance, we would see a straight 45 degree line (indicated in red). The onsight performance is as one would expect, lower than the maximum performance and this is why the blue points are below the red line. It is apparent that the difference is small for climbers with a relatively low maximum performance and it widens for higher able climbers. This indicates that an onsight becomes harder the harder you climb. The average onsight maximum is 2-3 grades lower for climbers who climb up to 7a or 5.11d redpoint but it increases to almost 4 grades for climbers with a maximum grade of 8a or 5.13b (and still widens further). Interestingly, the gap again seems to be a little lower for the few climbers who can climb 9b or 5.15b or higher. 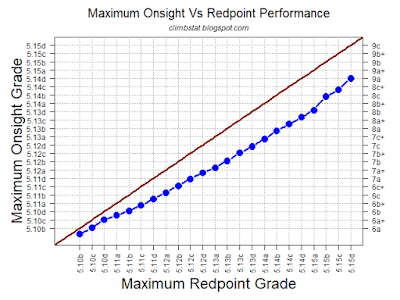 We have not considered flash ascents in this post. The reason is that there is almost no difference between the maximum onsight and flash performance in the 8a.nu data. The highest flash grades are higher than the average onsight grades but the difference is very small (ca. ⅙ of the difference between one grade or between 7a and 7a+). Personally, we think this seems surprising since a good beta might indeed give you valuable information.

Which bouldering and rock climbing destinations are most impacted by the coronavirus pandemic?

I am a bit reluctant to write about the coronavirus pandemic. There is on the one hand already a lot of information out there. On the o... 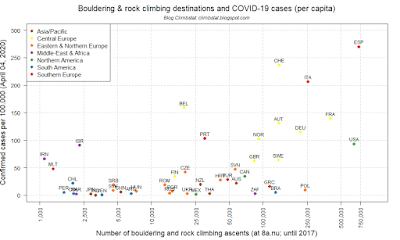